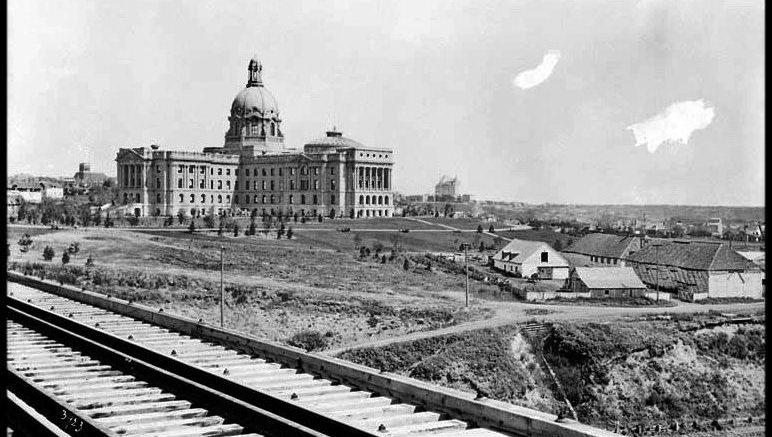 A Brief History of Edmonton

The history of Edmonton makes the city what it is today! Edmonton is an all-around cosmopolitan city, full of spirit, with a hearty beginning. Perhaps thanks to its central location, it is the seat of government for the province of Alberta, and as such it has a quiet confidence. Edmonton’s 1.3 million residents have a welcoming vibe, with a can-do attitude, full of dreamers and doers.

When the average visitor thinks of Edmonton, they probably think of Edmonton Oilers and Wayne Gretzky. But there is far more than hockey player memorabilia here. As one of Canada’s fastest-growing cities, there is much to experience in Alberta’s capital. 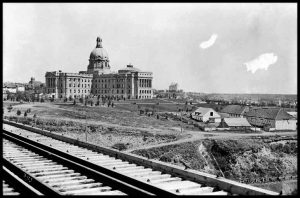 Edmonton’s humble beginnings took place in 1795 as a trading post, called Fort Edmonton, after Edmonton, a town north of London, England. But it wasn’t until the late 19th century that the settlement began expanding. It was incorporated as a city in 1904, and the very next year, despite its small size, became Albert’s capital city. The Legislature building was constructed in 1912, and by 1939, the population had grown to 90,000.

During the late 1940s, Edmonton struck gold. Well, gold of the oil type, to be exact! A large amount of oil was discovered just outside the city, and not surprisingly, the population boomed as a result. By 1970, the population exploded to about 430,000, with no sign of stopping.

Some notable places that have cropped up over the years are the University of Alberta in 1906 and the Art Gallery of Alberta in 1924. The Edmonton Airport had its first flight in 1927. The Edmonton Valley Zoo opened in 1959, and the Royal Alberta Museum first opened its doors in 1967. It was originally named the Provincial Museum of Alberta before Queen Elizabeth II bestowed royal patronage and renamed it in 2005.

Other popular attractions include Commonwealth Stadium, which opened in 1978 and the International Airport in Leduc, which began in 1957. North America’s largest shopping mall, West Edmonton Mall, opened in 1981. It started out small and developed in 4 stages, with its completion in 1999. 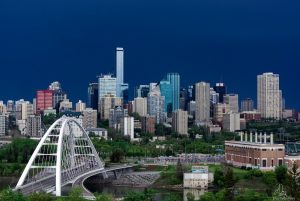 Today, Edmonton is a major tourist destination and still an important oil refining hub. It is a decent-sized metropolis, with the population hovering around one million people. In recent years, with the influx of young people, the hi-tech and service industries have taken root and grown quite rapidly. The median age in Edmonton is currently only 36! This is without a doubt a place where ideas take shape and spring to life.

Edmonton embodies a pioneering attitude with a collaborative mentality. Here people do not shy away from risk – it is one of the attributes of the local population that enable the city to grow. It even has an unofficial motto: “Take a risk – it’s the most Edmonton thing you can do.” This credo is even painted on the side of a downtown building in bold white letters.

The city continues to change rapidly – to reshape and reinvent itself, after many decades with a reputation as a cold, blue-collar town. Alberta’s Art Gallery moved into a modern building in 2010. With its prime spot along North Saskatchewan River, some reference it as a Renaissance City.

Even though Edmonton has a lot to offer, it’s not so “in your face” about it! This is where the overall cool and unassuming vibe originates. Here is a center for culture and the arts, education and culinary excellence, outdoor adventure and sustainability.

It is a city of unique design – embodied by the layout, architecture, and cultural scene. With its many museums, art galleries and social scene, lovers of all things new and happening will thrive here. Are you a foodie? Well, come to Edmonton, where the local chefs have taken it up a notch in recent years with a plethora of international flavors to enjoy. Check out the Top 10 Restaurants in Edmonton for some mouthwatering suggestions.

A love of the great outdoors also has a prominent place in Edmonton’s psyche. Explore its gorgeous river valley, or stroll through downtown’s expansive urban park area (it is a whopping 22 times larger than New York’s Central Park!) Jasper National Park makes for a great day trip.

Come discover for yourself exactly what makes Edmonton so inviting. There is something here that will delight everyone.