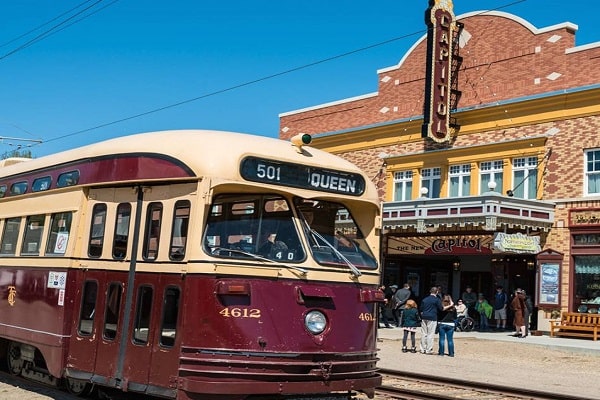 Nestled in Edmonton's scenic river valley, Fort Edmonton Park is Canada's largest living history museum with an 1846 fort and streets from 1885, 1905 and 1920.
The history of Fort Edmonton Park's conception goes back as far as 1912 where the Women's Canadian Club proposed that they keep and preserve Fort Edmonton, which was still standing since 1830 just south of the Alberta Legislature Building. This idea however was unsuccessful,[3] and in 1915 the remains of the old fort were torn down, amidst opposition from citizens who wished to see the old structures relocated so that they could be cherished for their heritage value. A renewed interest after the Second World War began the momentum that saw the park begin construction in 1969 under the direction of the Fort Edmonton Foundation.

As of 2008, Fort Edmonton Park is made up of four sections, each representing an era, all spread over 158 acres (0.639 km2).[6] The park is located along the south bank of the North Saskatchewan River in southwestern Edmonton. The first era is represented by the fort of 1846, followed by 1885 Street, 1905 Street, and 1920 Street. Visitors may board a fully functional steam train at the park's entrance which transports them across the length of the park to the fort, from which they proceed on foot and abstractly move forward through time by visiting all four eras.
Aside from the train, visitors may also ride horse-drawn carriages, streetcars, and automobiles in the appropriate eras. Rides on the train and streetcars are free with admission; however, rides on horse-drawn vehicles typically require a fee, and rides in the automobiles are at the discretion of the park staff who drive them.