Alberta’s gorgeous capital, Edmonton, stretches along the banks of the North Saskatchewan River in the center of the province. As one of Canada’s great cities, there is much here to see and do. Here is just a small list of the highlights! Whether you’re a local or just visiting for a weekend, you don’t want to miss these spots! 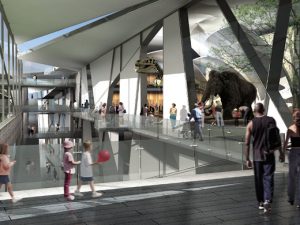 If you have a day to spend in Edmonton, get lost wandering around the Royal Alberta Museum. Having moved to its new location in 2018, Royal Alberta is now western Canada’s largest museum. With its perfect blend of cultural and natural history exhibits, along with an array of ever-changing temporary installations, one could easily spend an entire day taking it all in.

The ultra-modern facility impresses the most hard-to-please visitors, with fossils from the dinosaur and ice ages, a large aquarium, and exotic live insects. With its gallery hosting traveling exhibits, a large kids’ gallery with bug room and nursery, and aboriginal exhibits, the Royal Alberta Museum is time well spent. 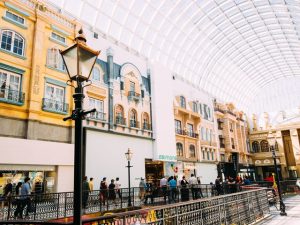 Arguably Edmonton’s most famous tourist attraction, this mall is the largest in Canada, and one of the largest in the world (take that, Mall of America!) However, with a dizzying array of hundreds of shops and restaurants, it’s best to have a game plan going in. This is not a mall for the casual shopper!

Also, inside you’ll find Galaxyland – one of the largest indoor amusement parks you’ll find anywhere. The mall even contains its own hotel. This, along with a movie theater, an ice rink, and an aquarium, Galaxyland is a destination unto itself. 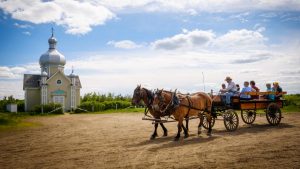 Ukrainian Cultural Heritage Village is an open-air museum that preserves the cultural history of the large number of immigrants from Bukovina and Ukraine. They settled in what is now Alberta back in the 1890s. Known to locals simply as “the village,” several historic buildings have been reconstructed, including the pale onion dome of an old Ukrainian church.

Living history abounds here, including a blacksmith, market, and an old-fashioned general store. Fully-costumed guides will interact with you, completely in the character of the day, which makes for a totally immersive experience. 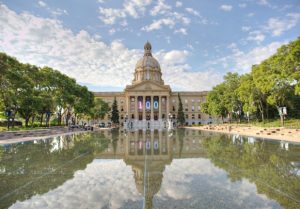 This is a stately building set in a lovely park-like garden, where the last Fort Edmonton once stood. The 1913 Legislature Building is as imposing as it is attractive, with incredible views across the North Saskatchewan River from the terrace.

Referred to as “the Ledge” by the locals, guided tours are a great way to learn the history, including the stunning architecture and secrets of the building. Spend some time wandering the grounds – and be sure to visit the nearby Legislative Assembly Visitors Centre to find displays of local art and culture. 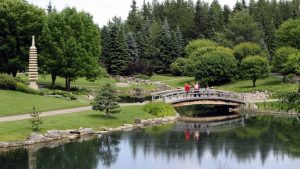 Another accolade for “the largest” area in Edmonton goes to this botanical garden. Founded in 1959, the 240-acre site includes a whopping 160 acres that have been preserved in a natural state. The remaining 80 acres feature a wonderful Japanese Garden. The gardens have numerous displays of beautiful plant species and a large tropical greenhouse with butterflies.

The Aga Khan Garden is a 12-acre site not to be missed. Free, guided walking tours of the entire gardens are also available. Be sure to visit the Indigenous Garden, consisting of plants that have been used by North America’s indigenous people for centuries. 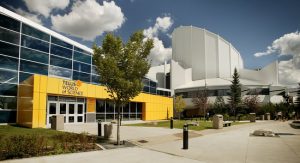 This modern white building promises fun for all ages. It is an educational science center, perfect for the kids, with interactive exhibits, covering topics such as space, robots, forensics and the environment. Next door is an IMAX theater showing fascinating films from all over the world.

Visit the free on-site observatory, offering a variety of star-gazing opportunities. Then, take a break from all of the fun and have a bite at the café.

While it is home to over 350 animals covering over 100 species, this zoo is also focused on research into threatened animal species. You will find animals both local and exotic, including red pandas, lemurs, snow leopards, and arctic wolves. Each are located in specially-themed areas to represent their natural habitat.

The animals and their caregivers are regularly out and about. Kids will get a kick out of the miniature train, carousel and paddle boats. 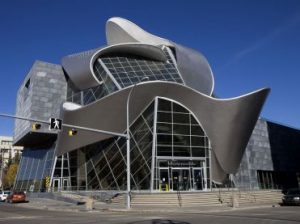 The building itself is a work of art – a twisting, modernist structure that invites you in with the promise of more visual delights. This art gallery embodies all artistic endeavors of the artists of Western Canada, with some intriguing traveling exhibitions as well.

It maintains an extensive collection of more than 6,000 pieces. The facilities offer educational programs, lectures, and workshops. There is also a gift shop, restaurant and theater space.

Finally, are you looking for a bite to eat after a day of exploring? Check out our list of top 10 restaurants in Edmonton.

For more information on restaurants, activities, and places to visit in Edmonton, click here.

A Brief History of Edmonton

The Best Nature Spots in Alberta